The purpose of the fiber test stand at JLAB is to determine the number of photo electrons produced by a minimum ionizing particle in a scintillating fiber at a distance of 200cm from the fiber end. The photon detector is a standard photo multiplier, in this case an XP2020. In addition the attenuation length of the scintillator can be determined measuring the light output at several positions along the fiber.

One end of the scintillation fiber is coupled to the photo cathode of a PMT (XP2020). For monitoring purposes a second fiber (light guide) is also coupled to the same PMT providing light from a blue LED. At a given distance from the PMT surface a collimated Strontium (Sr90) source is mounted above the scintillation fiber. Below the fiber and the Sr90 source a small trigger scintillation detector (TSD) is mounted to trigger on electrons from the Sr90 source that pass through the fiber into the trigger scintillator. The data acquisition is triggered by TSD and the analog signals from both the XP2020 and the TSD are digitized as well as their timing. Simultaneously a trigger is generated for the LED light source to monitor the XP2020 PMT during the measurement.

The detectors, scintillators and Sr90 source are currently located in an improvised dark box to protect the system for ambient light. Picture of the setup can be seen here as well and the fiber coupling to the PMT and the Sr90 source collimation: 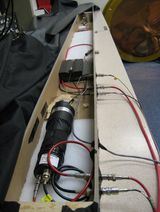 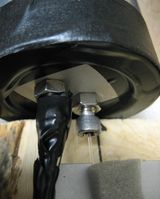 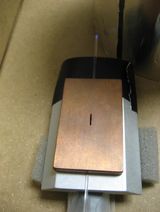 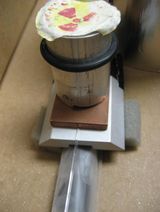 The Sr90 source is collimated by a piece of copper shown in the above picture. A schematic view is shown below. The scintillation fiber lies in a 1mm x 1mm groove of the copper collimator thereby being fixed in position. At the center of the copper piece a 0.5mm wide and 5mm long slit provides the collimation. The slit is in the center and parallel to the groove where the fiber is located.

The second picture shows the front part of the XP2020 housing. There are two feed-through for the fibers. The left black tapped one is the fiber from the blue LED. The right is the fiber to be tested and has no black tape or other protective clading. The feed through itself is a screw with a whole drilled through its length to hold the fiber in place. THE FIBER IS PUSHED UP AGAINST THE PMT ENTRANCE WINDOW. THE COUPLING IS AIR ONLY. NO OPTICAL GREASE IS USED! The last two pictures show the collimator assembly and Sr90 source. A detailed description is given below.

The response of the XP2020 on the LED light is shown for two different LED intensities (Low Voltage settings) in the form of the ADC spectra. The voltage divider used here for the XP2020 is a VD124K/T from Photonic (Type C divider). The fit is a Poisson distribution weighted sum of Gaussian distributions that are convoluted with the pedestal width and an exponential background.

The ADC spectrum of the trigger scintillator using a H3165-10 PMT and a 10cm long, 1cm thick and 8mm wide scintillator bar is shown here

is the number of events,

is the nth Gaussian convoluted with the pedestal-Gaussian and

is the nth Gaussian convoluted with and exponential background with

the probability of such an exponential background event occuring. The function

is a step function being 0 for

the ADC position of the nth Gaussian with width

is the convolution of the nth Gaussian with the exponential background leading to a tail for each Gaussian on the right side of the peak.

The Fit parameters are:

The following fibers have been tested:

Run 46 3.1 million event were taken over a period of 2 days. The data are analyzed and fitted in junks of 500000 events. The spectra are shown below with a list of the obtained value for

During the same period the response to the LED was measured and the mean number of photo electrons extracted. The bias voltage on the LED was constant at -7.91 Volt. The trigger rate for the LED was about 10 Hz.

This demonstrates that the data taking and resulting fit values are very stable with time.