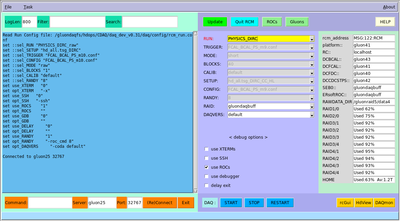 Trigger bits used in spring 2016 are can be found here.

Several ancillary LED triggers and the random trigger run in parallel to physics triggers. These triggers are distributed through the TS front panel (FP), and are used to monitor detector performance. Each FP trigger type has a specific trigger bit assigned. Trigger bits and corresponding rates are listed in the table below:

Assignment of the TS FP trigger bits and typical trigger rates are shown in the table:

The LED and random triggers can be enabled (disabled) using CSS. If you do not see corresponding trigger bits in the online monitoring plots (RootSpy) or the trigger monitor "trig_client", make sure that the corresponding pulsers are enabled using CSS screens for the following subdetectors:

In GlueX production runs, the FCAL and BCAL LEDS are controlled by scripts, which alternate several LED configurations (different LED colors and LED voltages for FCAL, upstream and downstream LEDs for various BCAL columns etc.). In the online monitoring plot one expect to see bits 3 and one (or both) bits 9 and 10. Scrips for both the FCAL and BCAL LED pulsers can be enabled using the CSS "BCALL LED pulser" screen as shown below.

If you do not see LED trigger bits for the FCAL/BCAL or DIRC, call to subdetector experts on call.

Trigger rates produced by the detector (generated by the GTP) and also distributed from the TS front pannel can be monitored using trig_client program. To run the program:

To restart the client, kill the process and delete the logfile
/home/hdops/CDAQ/config/hd_server/trig_client.log

An example of the trigger monitor screen, is shown below

NOTE: Lane 0 on this plot corresponds to the trigger BIT 1.

Trigger rate depends on the luminosity (flux of collimated photons), which can vary for different electron beam currents, radiator types, and tagging efficiency. The photon flux can be measured using the pair spectrometer. Therefore, it is practical to relate the rate of the main physics trigger to the PS rate. 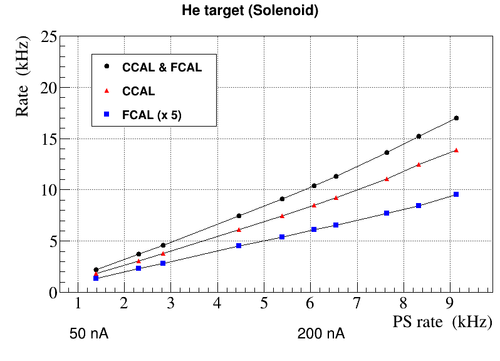 The typical DAQ dead time for main production runs is 95 - 98 %. If the dead time appears to be systematically smaller (on the level of 80 %) experts should be called. 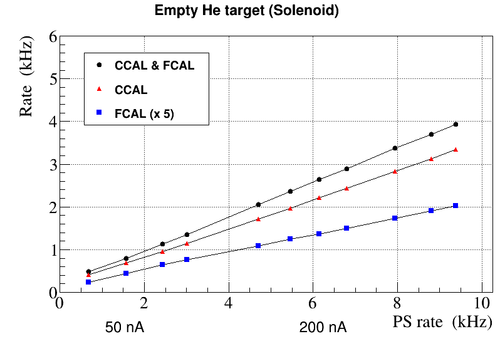 If the trigger rate is significantly different from that listed in the table (by more than 20 %).