Tests were completed in Regina to measure the number of photoelectrons detected by a Hamamatsu R329 PMT coupled to a 2m-long scintillating fiber excited by a Strontium-90 source located approximately 2m away from the photo cathode. The experimental setup is relatively simple and can be seen in the figure below.

The scintillating fiber was coupled at each end to a calibrated Hamamatsu R329 PMT using a small amount of optical grease. The signal from the PMT nearest to the Sr-90 source is used to start the ADC gate after being sent to a discriminator (D) where the threshold is set at 15 mV and a coincidence unit (CU) where the gate width is set at 120 ns. The other PMT which is located approximately 2m away from the Sr-90 source is delayed by about 40 ns before being sent to the ADC unit. 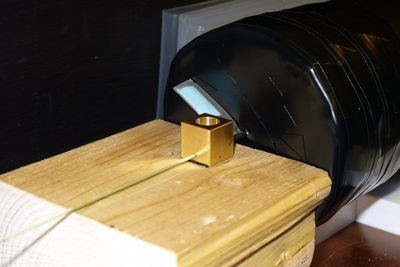 Several different fibers were measured using this setup. Each fiber was polished at both ends using a FiberFin 4 fiber polisher before being coupled to the PMTs. The fiber fits into a 1mm-diameter hole drilled through a piece of brass (see the above picture) and the Sr-90 source sits snugly in an opening directly above the fiber in that same piece of brass. A 5mm-long hole of 0.5mm-diameter is drilled through the brass perpendicular to the fiber and is used to collimate the source. The entire setup was located inside a light-sealed black box, and for added light protection the room lights remained off while measurements were taken.

The actual number of photoelectrons detected by the PMT can be determined by a simple calculation:

where the Mean ADC Channel is the mean of the non-pedestal events in the spectrum minus the pedestal position (in this case the pedestal is at channel 12), the ADC specifications give the calibration of 0.25 pC/Channel, the gain is determined as described above, and 1.602 × 10-19C is the charge of one electron.

Two Bicron fibers were tested (BCF-20 and BCF-12) along with three Kuraray fibers (SCSF-78, SCSF-81, and 3HF(1500)MJ). The ADC spectra of the PMT 1.88 m away from a Sr-90 source are shown here for each fiber that was tested. Keep in mind that the Mean value displayed in the stats box on each graph is NOT the mean used to calculate the number of photoelectrons detected since it contains events in the pedestal channel.

It should be noted that throughout the measurements, the source remained positioned 12cm away from the trigger PMT. ADC spectra were obtained as above for three different discriminator thresholds: 10mV, 15mV, and 20mV (see results below). As the threshold increases, higher energy events are selected, and thus the number of photoelectrons calculated based on the ADC spectra also increases. At a threshold of 20mV, differentiation between the first and second peaks seems to be becoming apparent. To ensure that the trigger requirements were constant throughout the measurements, the threshold was held constant at 15mV and the source was kept at a constant distance of 12cm from the trigger photo cathode.