There is a recording of this meeting on the BlueJeans site. Use your JLab credentials to get access.

Review of minutes from the last meeting

We went over the minutes from July 14, a month ago now. Richard has made the judgment that the problem with particle propagation not being able to find the normal to a surface, reported as a warning, occurs rarely enough that it should not cause a problem for us. This we can live with.

We reviewed the issues.

Mahmoud showed an anomaly in the two-photon invariant mass distribution near the η. There are dips on either side of the η mass. See his figure below (lower left plot). The dips come from two regions of beam photon energy which are near the corresponding boundaries between the tagger microscope and hodoscope. The regions show as dark blue in the lower right plot. There may some issue with some kind of subtraction from the data since the holes have negative entries in the histogram. Mahmoud will enter this as an issue. 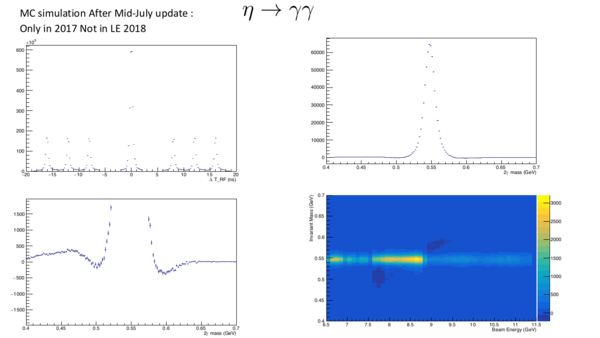