The Hall-D software contains code for doing semi-parametric Monte Carlo simulations of the GlueX detector. The simulations are semi-parametric in the sense that they use resolution tables derived from full ab initio, hit-based, GEANT simulations with reconstruction. The resolutions are used to smear generated values and apply efficiency cuts. The resulting data can then be analyzed as though it were fully reconstructed GEANT data.

The system works by looking up efficiencies and resolutions tabulated in the form of 2-D histograms inside of ROOT files. Any DANA program can have the hdparsim plugin attached that provides alternate "factory"s (algorithms) for producing charged particles and photons. Configuration parameters control which algorithm is used and aspects of the algorithm (i.e. whether the efficiency cut is applied or not). Input files are in the same HDDM format used to feed generated events into the Hall-D GEANT simulation. However, in this case, the hdgeant simulator is bypassed and the generated events passed directly into the analysis program (i.e. one does not need to run hdgeant or mcsmear).

This method has the benefit of running much faster (>100 times) as opposed to doing the full simulation/reconstruction. It does, however, come with limitations:

The source code for hdparsim is kept in the Hall-D subversion repository here:

It is included in the source code in all releases, but has not been built as part of the core sim-recon package. If has not been built (check for $HALLD_HOME/lib/$BMS_OSNAME/hdparsim.so) then simply invoke "make" in the hdparsim source directory.

The hdparsim plugin will need to have the appropriate data tables (ROOT files) present in the directory it is being run in for it to work. The plugin attempts to use the CURL library (if support was compiled in), or run the curl program to download these automatically if they are not already present when the program is started. Therefore, there is no need to download them "by hand". However, for the purposes of documentation, they can be found here:

To make use of the alternate method of producing reconstructed objects that hdparsim provides, one must set a few configuration parameters. A table of the relevant parameters is given in the following section. Here, an example is shown which uses pythia (contained in the bggen program) to generate events and hd_root + hdparsim to process them.

The command line arguments -PDEFTAG:DTrackTimeBased=HDParSim and -PDEFTAG:DPhoton=HDParSim tell the system to use the HDParSim factory as the default when obtaining DTrackTimeBased and DPhoton objects respectively.

There are a few configurable options with hdparsim that are available for debugging purposes. They are:

It should be noted that the default configuration for PYTHIA as manifest in the config. files kept in the bggen/run directory is to allow GEANT to decay most of the particles that it knows how to rather than having PYTHIA do the decay. This is not useful for the case of πos for example since hdparsim cannot smear a πo itself , but only the resulting photons from its decay (i.e. the particles that are actually detected). As such, you will want to tell PYTHIA to decay these for you. This is done by editing the file pythia-geant.map and inserting a "-" (minus) in front of the GEANT id numbers you wish to have PYTHIA decay for you.

Looking at the results

The resulting histograms from the above example will be in the file hd_root.root in a directory called "INV_MASS".

Resolution tables have been produced with an 80% (1200A) B-field map and a 70% (1050A) map. These were done with code stored at https://halldsvn.jlab.org/repos/trunk/Studies/2009.11.23.track_resolutions. The tables themselves can be obtained from the JLab CUE in the directory: /site/www/html/Hall-D/datatables. Direct links are provided below for convenience.

NOTE: when you download these files, they will need to be renamed to:

and placed in the working directory from which you run hdparsim.

The following 2 plots show the ratio of the relative transverse momentum resolution of the 100% field to the that of the 80% and 70% fields. The ratio should scale roughly with the field which scales with the current. These seem consistent with expectations. These plots are for pi+ tracks only. 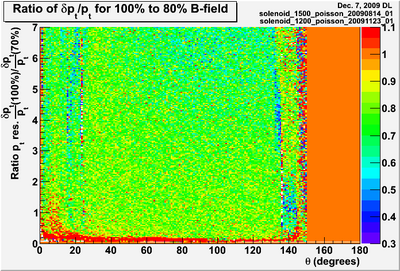 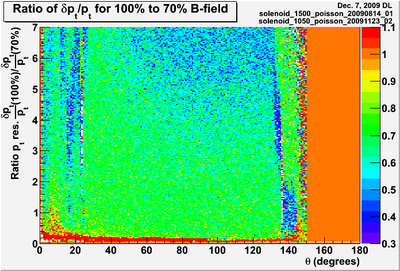 Below are 2 plots showing the efficiency difference of the reduced field results with that of the nominal (100%) field). Note that the Y-axis is zoomed in to only show up to 1.5GeV/c. As expected, a slight increase in efficiency is observed at lower momentum and angles for the pi+ tracks. 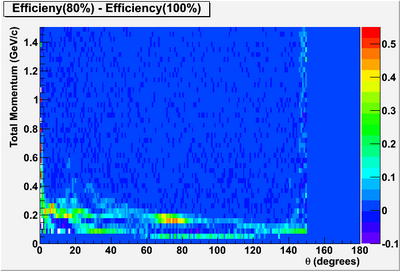 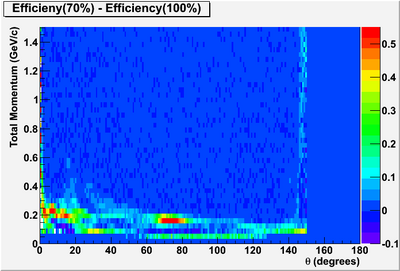