Thank you for taking the time to look at this. I can believe that collimation very near the BCAL makes things worse in terms of beam conditions. However I'm not sure I agree with your conclusion regarding the lack of benefit of a small spot size.

I think your calculation of an additional 35 ps of to timing resolution is valid when considering TOF behavior. Here you are most concerned with spread between t_start and the time recorded by the nearest end, the downstream end, (this one is going to dominate the weighted average.)

However, for z position, we need a difference of both ends to make the measurement. In this case there is no timing compensation. In fact it is "anti-compensated", the light arrival time at the upstream end is spread even more.

Getting back to the issue of desired resolution, let's assume that at forward angles a desirable resolution is between 7-9 mrad. This is well matched to FCAL and BCAL azimuthal resolution. Of course as we concluded in the last exchange this goal is not practical near normal incidence, but may be possible at forward angles where the bulk of the photons are going. I've regenerated my plot with only the 7 and 9 mrad lines on it (attached). I've also overlaid the beam spot size in z for both the 2.6 mm and 1.0 mm collimator. I calculate this as (spot size) / ( sqrt(12) * sin( theta) ). In the beam test analysis we are going to need to remove the effects of the collimator to get our intrinsic resolution and ultimately compare with the desired resolution (red and green lines on the plot). It seems like the best way to do that is to minimize the contribution from the collimator spread. 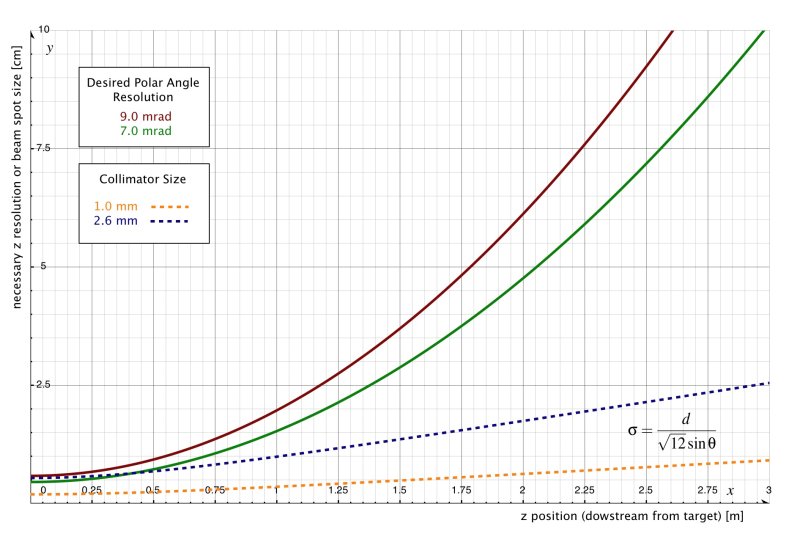 The estimate is for the timing uncertainly contributed by a finite splot size, which I thought was the reason for concern about the spot size. My conclusion is that this does not have a large effect on the position resolution from timing. See below.

These numbers should scale with the the spot diameter, so take the spot size for the 2.6 mm diameter as an example:

Teleconference - June 1st: Elliott, David Lawrence and Zisis discussed issues in connection to collimation and beam flux. The consensus was that the tagger t-counters can be driven to around 1 MHz which would result in 8 KHz on the BCAL Module when using the 1.0 mm collimator. Since this collimator will result in a beam spot of 6.7 mm in diameter, we probably do not need use an additional collimator immediately in front of the BCAL, although its use is not excluded and may be desired. The use of such a collimator would have to be decided after simulating its effect. As far as the DAQ rate it was agreed that this should be kept around 1 KHz to avoid deadtime and related problems. The DAQ should be ready in a few weeks.

Other interesting items that were discussed: BPM (David has received some responses and will chase this), data stream (the desire is to have digitized MC and cosmics data for David to pass through DANA), use of a He bag leading to BCAL module from CLAS, use of veto counter in front of module, and Coda tutorial by Elliott.

From Franz on rates and collimators

As I mentioned before (and presented on the Coll.Meeting in November (cf. https://halldweb.jlab.org/doc-private/DocDB/ShowDocument?docid=555&version=1), the spot size in the alcove is always of the order of >=1.5cm for existing collimators. In order to get a tagging range of ~137-653 MeV (mentioned in Rafael's mail), the electron beam energy has to be ~685MeV (Hall-B tagging range: 21.1% to 95.2% at this E0). Incoherent brems. has a comparatively wide spread at this energy causing a reduction of the photon flux after collimation to only:

The beam sizes after collimation are as follows:

If you want a beam spot smaller than 1cm (at decent rates), you might consider to put the BCAL module at the PRIMEX position upstream of CLAS. An object of size 400x12x23cm^3 fits there quite good (even enough space for rotating the module).