Typical fibre spectra at 10,100 and 300 cm.The green data points are the raw spectra as seen by the photo-spectrometer. The light blue points are scaled by an approximation to the quantum efficiency of a Bi-Alkali photocathode. The fit functions were of double Moyal type (see equation below). The reader is directed to the Regina Fiber NIM paper for details. The fits were cross checked versus simply summing the bins (~0.3nm) resulting from the grating in the Ocean Optics spectrophotometer. 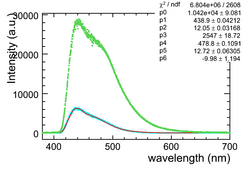 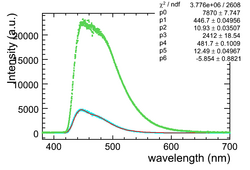 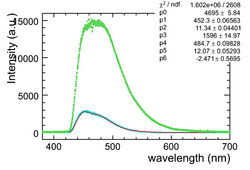 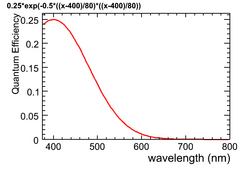 So far 6 fibers have had their attenuation lengths measured: 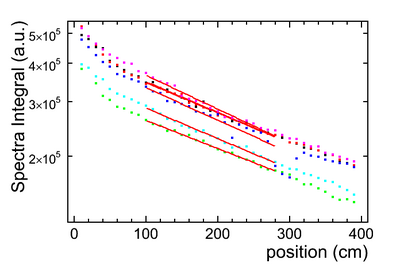 The following two measurements were taken of the same fibre, the first was the afternoon previous to the second measurement, re-coupling it before the second measurement. You can notice that similar features show up in the measurements, and which do not appear in other attenuation spectra, that indicates that there are features within the fibre smaller than 10cm that affect the light output at that point on the fibre. This may be a crack in the core of the fibre or possibly a change in the doping in that region or stresses in the polystyrene due to the extrusion process. This also indicates that the measuring process is stable and repeatable within coupling tolerances. 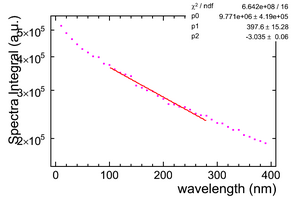 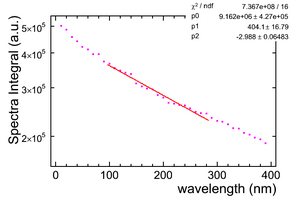 *note that the horizontal axis is labeled incorrectly as wavelength. This should be position(cm).

The correction function used to simulate the bi-alkali readout was modified to that as shown on Kuraray's web page for the PMT used in their attenuation length measurements. The scaling function is now

Andrei used the same data but his own analysis scripts. The integrals are found by summing the bins instead of finding the integral of the fit function as in Blake's analysis. Blake had also checked his fitting function (Moyal) versus bin-summing and the results were consistent. 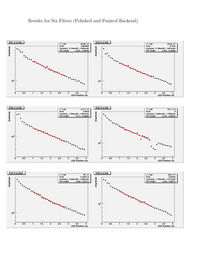 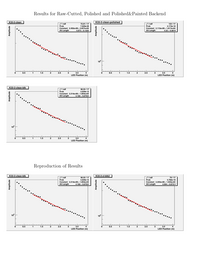